It is one of the most feared injuries among runners and triathletes ... the so-called "runner's knee".

El Iliotibial band syndrome (ITBS) an injury that usually appears suddenly and without giving many warnings before the pain is acute and disabling, and even if we do not want to, it leads us to not being able to train or to have to decrease the rhythm of training a lot, by the appearance of acute pain and disability that entails.

Traditionally, this injury has always been attributed to an excess of overload and friction of the tendon of insertion of the tensor of the fascia lata by the Repetitive gesture of career dynamics on the bony structures of the knee where it is inserted But is this really true? Is that friction that produces the inflammation of the tendon? What is the runner's knee?

There is already a lot of scientific evidence that documents that really this problem is not as simple as you thought, and that the cause is not justified only by a gesture of friction repeated by the dynamics of the race.

Since the 2012 hand evidence demonstrating the correlation between the role of hip abductor muscles in patients with ITBS, especially in corridors. Factors such as the weakness of this muscle (mainly the gluteus medius), lack of motor coordination between the muscles of the knee and hip, and biomechanics and career gesture have been shown to have a direct relationship with both the appearance and the final resolution of the problem.

Therefore, traditional physiotherapy treatments such as stretching, massage, cyriax, dry needling, EPI, shock waves ... although at specific times may have some indication, they have doubtful efficacy in the complete and long-term resolution of the problem, and should not be the main focus with which to approach this type of injury, for the good of our athletes.

What should we do?

Focus on look for the root of the problem and correct it. Even in active athletes, with good musculature at a general level and who perform weekly gym routines we find deficiencies and asymmetries of strength in stabilizing muscles such as the gluteus medius, which entail excessive suffering from the work done by the tensor of the fascia lata, and ends up causing pain at its insertion point.

Once we find the source of the problem, we will divide the treatment into 3 parts:

This work is ESSENTIAL to be able to solve the problem, and as we have said before, it is based on a strength work Gluteus Medius (and other hip abductor muscles), Gluteus maximus, CORE work and global work of motor control of muscles that is inserted in the knee. The stabilization of the pelvis is essential for any runner and has to be very controlled so as not to produce imbalances that lead to injury.

This work is done through isometric, concentric and eccentric exercises (according to each moment of the rehabilitation and that the physiotherapist must know how to guide correctly). Some examples of exercises are shown in the photos below.

2 Correction and adjustments of the career technique:

will work according to the findings of the previous assessment to increase / decrease the race cadence, shorten the stride, control the pelvic scale ... that is, make our triathlete is a more efficient runner and cause less overload to run in their structures and joints of lower limbs.

3 Control of the stroke volume:

Even for athletes with long evolution of this type of injury, the realization of this type of approach and treatment usually gives encouraging results. We have to banish the idea that all rehabilitation treatments are "lying on the stretcher", sports medicine and physiotherapy have evolved a lot in recent years ... so we can continue to do and enjoy the sport. 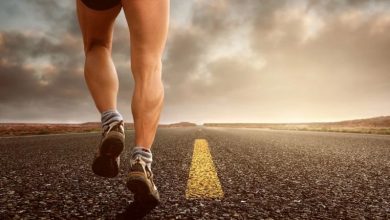 Exercises to avoid overloads in solos and calves

How does inactivity from confinement affect my body?

Be careful with plantar fasciitis, what can we do to prevent it?

The stretch Protector of injuries?