Felipe Gutiérrez tells us this week about Ainhoa ​​Murua, who participates in his fourth Olympic Games

Undoubtedly, the Spanish triathlon is indebted to you, I think that one day the Fetri will have to recognize you as the athlete and I include the boys there, who have been present in more Olympic Games and that with the Rio Games they will be four times Olympic . Almost nothing!

I have known Ainhoa ​​for many years, back in November 2002 I did an interview for Finisher that was published in January 31-February 2003, you have spent more than 13 years and he is still here giving you day-to-day training, competitions and always looking for that Olympic classification.

You are 38 years old, that day you were 24 years old and you had practically just come from the Cancun World Cup and despite the offers you had from various clubs you wanted to continue living in Zarautz, "I am very much a town" you told me and there you are still faithful to your land , to your people.

I remember that his beginnings in sports were swimming in the Zarautz swimming club and beach soccer with the school.

His official triathlon debut was in Coria, it was very hot and I ended up in the hospital with 100 meters to go to the finish. "I thought I had been caught by a car", he told me.

She has a degree in Physical Education and in our interview I asked her: Don't you think about the Olympic Games? Ainhoa ​​told me: "I think that being in the Olympic Games is difficult, there are very important people like Ana, Pilar, Maribel, Virginia ... and I imagine that new people will appear too. I see it difficult, but I will try, and what comes out" Well, it did come out ...

At that time Ainhoa ​​was very quiet, it was difficult to get much more out of the yes or no. A few days ago I talked to her and we remembered those moments when I laughed at her for that.

At home they speak basically Basque and follow the principles of all life. She did not like the recorder much in the interview or the camera, it was a suffering for her. 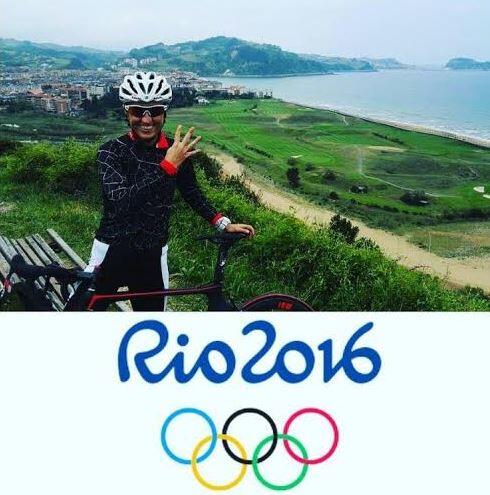 I remember asking him what his family thought of his dedication to triathlon.

Ainhoa ​​sighs and says (I remember it was in 2003) ” My mother is a little desperate and at first she didn't want to, since she told me it was too much, especially when I take her clothes to wash. At home I don't count anything, I don't like to count things. My father doesn't like me not to tell him because he finds out on the street and I don't tell him almost anything. It burdens me to talk so much".

Ainhoa ​​was hooked by the triathlon of her town, that of Zarautz, she knew people who ran it and she wanted to do the same, since she has not benefited from it.

Her coach since 2004 is Iñigo Múgica and her great support is Jon Unanue, they have been together for…, they have the same vice, the triathlon and together they are seen training almost always when she is obviously in their land.

I rarely use this column to talk about someone specific, normally at my nap time I think about things that happen or that I see badly, or that…, I only dedicated it once to the best Spanish triathlete Javier Gómez and this time I want to dedicate it to the Best Spanish triathlete and who is going to be in some Olympic Games for the fourth time. Almost nothing!

I would also like to include in this column the one I knew as his first coach Pedro Garrido who I would like to have already recovered from his accident. Ainhoa ​​told me that he met Pedro very recently in Vitoria, what a time those were!

On this Wednesday there are no dreams or nightmares, just that I was excited to be able to thank AINHOA MURUA in capital letters for everything she has given and continues to give for the triathlon, an example as a woman, faithful to her principles and always smiling at the one that I have never seen with bad faces or arrogant airs despite being Olympic and being among the best in Olympism.

Do not worry Ainhoa ​​that if this Federation does not know how to reward you, value you, honor you, others will come who will recognize you, after all the elections are coming.

THANKS AINHOA your effort has not been in vain, you are a reference for many people, many girls talk about you and know you and would like to be safe where you have arrived. You can be proud of your effort, it is worth continuing to be on the front line.