"In the Rolling Start the athletes leave in approximately 15 minutes and are ordered by their quality in the swimming sector, each race time will begin when they pass the starting line"

I am clear that if we continue doing “bullshit” we load the invention of the triathlon and we do other things like “camp fire”, “joke contest” and similar things.

But let's see, do you really like this exit system? Well, if that is the case, I do not understand anything and you are not going to really compete, surely it is fine for the postureo so renowned now, but a competition is something else.

Can you imagine in track and field athletics in an 10.000 that the athlete leaves when he estimates ?, it would be very fun to guess who has won. And if we did it in 100 smooth meters ?, it could be interesting.

So much experiment Ironman makes us all see that it is something wonderful, it goes that if FETRI does it!, We shot him even in the waterline.

What is Fetri going to use? I can't believe it, although it has already given its approval in tests on which "it depends rather economically", I hope that in its MD and LD championships neither FETRI nor ITU They embozzle us even more.

I would like to be able to sleep a nap today, I am tired, the sun is strong but ... the "Rolling Swim Start" obviously does not let me even snooze,

I think this is overflowing ... and in the normative IM it says: "At the start of the race, the athletes leave in approximately 15 minutes and are ordered by their quality in the swimming sector, each race time will start when they pass through the starting line.".

of the athletes will be activated once they cross the carpet of the exit just in the arc of the swimming exit".

It occurs to me to think, and if it doesn't detect the chip? Well, nothing goes to your house without knowing the real time, besides how you don't know when you left.

Well, it seems that this type of exits is cool, because the truth I can not understand and I assure you that I will not go to see this type of tests, this type of badly called competitions.

I don't know how the IM clock is not invented where I could accumulate all the test data and in the end pass it to a database, knowing “the business is the business” would not surprise me if they take it out and everyone goes running to buy one to be able to "compete" with at least equal clock.

These things are difficult to follow, understand, and be glad that they exist. I have read comments of all kinds, some in favor and others against, and I already consider what the competition officials are for, these are why they "swallow everything" also if it comes from IM or from squirt organizers that imitate.

I want competition where the exits, whatever they are made on equal terms, that if we do not do the modern ones thinking that it is very chic to participate in a test with “Rolling Star”, the truth is that it is cool to get home and tell the goalkeeper: "I come from an IM with Rolling Star", surely the goalkeeper will be amazed with the brave, daring and cool of his neighbor. And let's not say in the office, the most of the most.

The heat makes my nap short, I think only the award to Javier Gómez Noya of the Princess of Asturias award that has been waiting for so many years is happy, to figure out how much the prize was previously Prince of Asturias and Javier already opted for the prize.

What I just realized when I saw Facebook this morning is that I don't have a photo with Javier Gómez Noya and that you all have it. I don't know what that means exactly but one day I will become one with him. 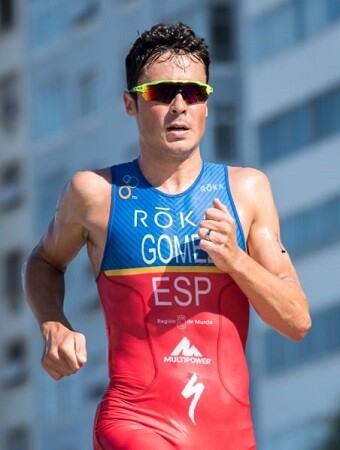