Felipe tells us about the "competitions" of children's sports in triathlon.

The truth is that I have always been surprised by the training and of course the competition of the little ones, of those who are still in time to play other things that are not these efforts that I honestly do not think are good, but it is only my opinion .

A few days ago and through a friend I read this article and at least I realized that someone thinks like me and that we should not exaggerate in the training of those who "want" to be champions of something.

What do you want a daughter or a medal?

It is impressive to read the concerns and problems of this gymnast and this paragraph I think marks his entire career. Maria says: "I've called my house four times. I have told my parents that I can not take it anymore and they come to look for me. My mother is very worried. I asked him: What do you want, a daughter or a medal? "

Personally, both the training and the competition of the little ones worries me. This year I am going to the school circuit of the Madrid federation and although I have some cadet and some of other categories I usually observe what moves around this type of for my miscalled competitions.

I think that more than competitions, we should look for something more playful, although it seems very difficult because not even the parents themselves could "endure" [email protected] fuera [email protected] more and do not get on the podium being "the best of the best."

As soon as you get to the test area you see the atmosphere. Children taking out their bicycles or potatoes giving more than advice, and even making them warm up more of a football team than of an athlete that is going to do a test of these characteristics.

Some fortunately have a club coach and it seems that it is a bit better.

When the pre-Benjamin tests begin, it seems that the Olympic Games have begun, surely some of them will see the same qualities of Javier Gómez Noya reflected in their little boy. They encourage him or rather they shout to them, they could pass for fans of Atleti or Madrid on the day of the Champions League. Come on! Run more! Assure the podium! No paressssssssssssssssss ...!

The children who get the podium, the medal are excited, the others of everything, some seem to care about us and others arrive rather crying perhaps for disappointing their daddies who want a champion. 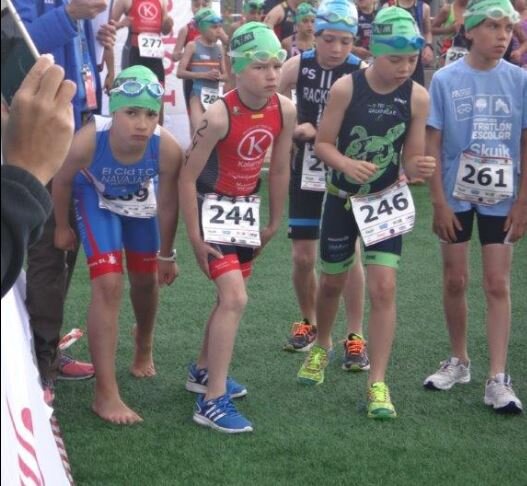 I do not understand why in these categories of pre, of youngest, youngest, child there is a podium, they should give them all the same for having finished, maybe a medal, a shirt and even a book could be a good idea. The challenge should be ... finish the test, have fun and have the desire to return.

I've seen some parent-manager give them a talk, to explain where the failure was to not get on the podium.

Parents, some of them do not respect much the tours, some follow their child anywhere and crossing in front of other children who are doing the test to approach another corner to encourage their "champion".

I do not like schools to make champions, maybe children win many medals, but maybe in less than two or three years they do not want to do this sport that I have little fun for what I see. Some already have trained athletes, with strong muscles and even sun marks on legs and arms after having already trained both on the bike and on the track and in the pool. They are already mini-athletes.

They still think that you have to train hard as a child, just as they think that Gómez Noya like that started and they are certainly wrong.

We should reflect, parents, coaches, clubs and federations if this is the way.

Of course this in my point of view is not, we must find the way "playful" and not the tremendously "competitive".

Nap time on Wednesdays is difficult when you think about these things.