The 74ª edition of the Spanish round will be played between the 24 of August and the 15 of September 2019 with output from the Salinas de Torrevieja and final in Madrid.

3.272,2 km of route with eight finals high, five of them unpublished.

Unipublic unveiled on Wednesday, December 19, the route of La Vuelta 19, which will be played between the 24 of August and the 15 of September 2019.

The Spanish round will start in the Salinas de Torrevieja, having a time trial by teams which will be the first of the three stages that will tour the Costa Blanca. Once entered in matter, the peloton will leave the province of Alicante to go towards Valencia, Teruel, Castellón, Tarragona y Barcelona. These first stages will begin to draw the general classification, with arrivals to the sprint and unpublished highs that will mark the first differences between the favorites. 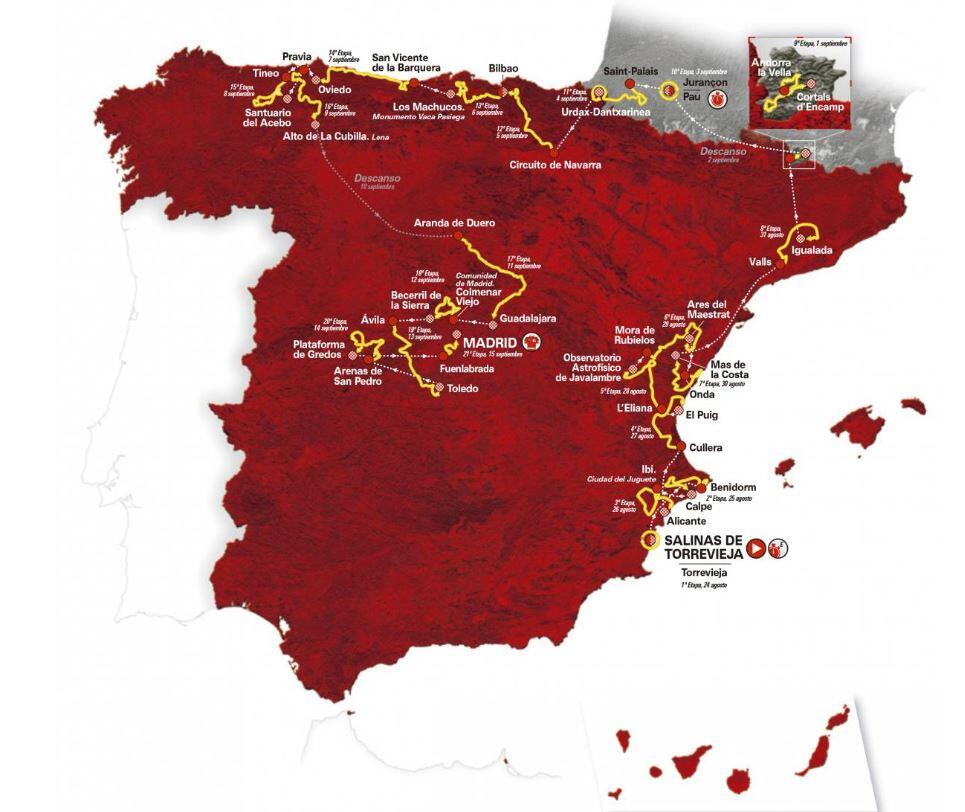 The 19 Tour will have a first inflection point before the first day of rest with one of the queen stages. A spectacular mountain day in the Principality of Andorra that will link some of the hardest ports in the Andorran territory and discover a new ascent to the Coll d'Engolasters with a link section of 4 km on gravel track. The race will then cross the France border to return to the Peninsula by Navarre, the Basque Country, Cantabria y Asturias, where you will visit some known peaks and other unpublished ones that will delight climbers, such as the Sanctuary of Acebo or the top of La Cubilla.

In his last week, the race will move through the Central Sistem, alternating Castilla la Mancha, Castilla y Leon and Region of Madrid.

A final 'rompepiernas' between the mountains of Gredos and Guadarrama, crossing legendary ports of La Vuelta as La Morcuera, which gave us a final heart attack in La Vuelta 15 with Fabio Aru snatching La Roja from Tom Dumoulin at the 20ª stage.

"It will be a hard but very interesting Tour, with surprises, intrigue and emotion assured. Stages short but intense, maintaining an innovative line and discovering new unprecedented increases. The Vuelta brand is what it is and we do not renounce it, on the contrary, we seek to strengthen it, "said Javier Guillén, general director of La Vuelta.

October 20, 2020
Search
Sponsored by
partners
Button back to top
Close
Close
This website uses its own cookies for its proper functioning. By clicking the Accept button, you agree to the use of these technologies and the processing of your data for these purposes. Configure and more information
Privacy policy