Spain has two medals in the European Triathlon Sub category 23, Roberto Sánchez in the men's race and Cecilia Santamaría in the women's

Today the European Triathlon Sub 23 Championship is being played in Eliat, where in the men's event, Roberto Sánchez He has achieved bronze.

As for the rest of Spanish Marta Sanchez has finished in eighth position, Carmen Gómez in the 12ª and Noellia Juan did not finish the round

Cecilia with this second position has equaled the feat achieved by Ainhoa ​​Murua in 2012 in this same scenario, although she is last in the elite category 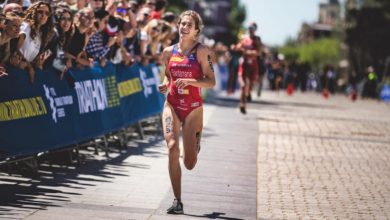 6 Spaniards in the World Cup of Tiszaujvaros, the Cup in qualifying format

6 June, 2019
Sponsored by
Partner
Button back to top
Close
Close
This website uses its own cookies for its proper functioning. By clicking the Accept button, you agree to the use of these technologies and the processing of your data for these purposes. Configure and more information
Privacy policy