Jon Erguin has achieved a magnificent ninth position in the Winter Triathlon World Championship held today in the Finnish city of Jamijarvi.

The Russian Pavel Andreev prevailed in the men's category, this being the second time that he achieved a world title followed by the Italian Daniel Antonioli, and the Swedish Andreas Svanebo obtaining the bronze.

Jon Erguin, current Spanish Winter Triathlon champion, second in the Oberstaufen European Cup and fifth in the European Championship, finished the event in ninth position with a final time of 01:22:45 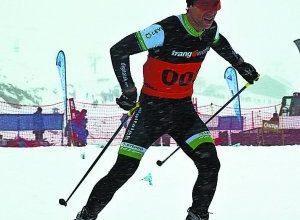 26 January 2013
Sponsored by
Search
Button back to top
Close
Close
This website uses its own cookies for its proper functioning. By clicking the Accept button, you agree to the use of these technologies and the processing of your data for these purposes. Configure and more information
Privacy policy