Javier Gómez Noya faces 2011 with his mind set on ensuring qualification for the London Olympics next year. Precisely the triathlete has been in the English capital recording an advertisement for Powerade and, while we share filming with him, we take the opportunity to talk about his goals, his previous Olympic experience in Beijing, the World Cup he won last year and Operation Greyhound.

We are in London, where in August 2012 will be the Olympic Games, a circuit that you know well from the World Cup ...
I have a very good feeling about racing here in Hyde Park. For example, last year was one of my best races and I won. Whenever I go out to train here I feel very good, I like it because of the weather because it is very similar to Galicia perhaps, but I also know that it does not mean anything, that in the Games it will be a completely different race. What you have to do is arrive well prepared, fit, without injuries and fight that day.

Fight like you did last year when you ended up proclaiming yourself world champion
Last year he started with an injury just a week before the first competition, when he was quite fit and highly motivated. I developed a discomfort in the hip that left me touched for a month. I missed the first two competitions and all the form you lose by not training. The second race did not have discomfort but I was not in good form, I was twelfth, a result that is not bad but yes if you aspire to the World Championship. In Madrid I was already fourth, at a decent level, in the second European Championship and I started to get good results until I reached the final with real options to be world champion, which was not easy but as things turned out I was lucky and my rival did not have a good day but other times I was unlucky. The sport is like that and in general it was a great year and I appreciate it a lot for that, for having had problems at the beginning and having been able to overcome them and achieve the goal.

And speaking of goals, which one have you set for yourself this season?
The first thing is to try to ensure qualification for the Olympic Games, that if I am at the level that I have been until now, I should not have a problem and there is a competition that motivates me especially and it is the European Championship because it is in Pontevedra, where I live. It lasts only one day and we are going to use it as a test for the Games. It makes you fine-tune your preparation for tests that are only in one day. It's June 25 or 26. Especially to see if modifications need to be made. Finding the set-up in this sport is difficult. As there are three disciplines it is not exact, you have to be well at three on day D at hour H.

Which reminds me of the Beijing Games. This year the last event of the world series is the Chinese capital. You return to a scene of not very fond memories ...
I have good and bad memories. Bad for the Games, I was not as I would have liked with a lot of problems due to the heat, but at that same circuit I won in 2007, which makes me think that each race is different. That you have made a good result one year does not mean that the following year you will do the same or the other way around. In the end the rivals and how the race is going is what toughens the tests. There is nothing special about the Beijing circuit, it is not the flattest, there is a climb on the bike but in general it is going well for me. I don't think too much that on that circuit I was not very good at the Games because three years before I was. It will be one more race and to enjoy it, it will simply be the same scenario.

How does one recover emotionally when things don't go as planned?
It was a hard blow but I didn't stress too much either. I knew that I had been dragging an injury for a long time, which then took me six months to run again after the Games. I gave everything I had, I did everything I could and I was fourth. Maybe I heard a lot of criticism later, people who didn't care about you in four years and then demanded a medal from you. I have learned to pass, I do this because I like it, because it is my passion and whoever wants to value it should value it. 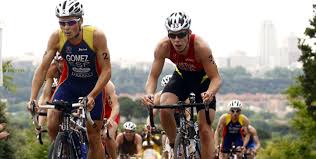 Come on, you do not do it for the medals
In Spain we are very given to talking about medals and starting to count them but those who count them do not know the sacrifice that it costs even if they are well. There are sports that are more random than others, sports with a very important tactical component, including triathlon. You have to make many decisions in the race, whether to attack or not, when to do it, to attend to the movements of your rivals and that means that the strongest does not always win. A one-day race is almost a lottery. What we have to do is do our best and fight that day like never before. Hard times make you learn. When everything goes well and you win, you don't always reflect too much on what you have done, but when things go wrong you think about why, the preparation for race day, what you have done wrong and that makes you try to avoid them for the next race. There are always going to be good moments and bad moments, but you have to try to maintain a mental stability: neither excessive euphoria when you win nor collapse when you lose. In that regard, I never doubted myself for having finished fourth in the Games, I know that I am capable of winning because I have already won many times worse, I am also realistic and I know that there are many very good opponents who can win. The important thing is to work well and not have injuries. With age you realize that the important thing is not to get injured because being well I can compete at a high level.

How does a triathlete take care of himself?
You have to take good care of yourself at all levels. You have to take care of your body with stretching, physio sessions, and also eating, resting ... It is a sport that can be quite harmful, especially when changing from the bike to the running race. You have to be careful. Luckily I have not had many serious injuries, I was unlucky because I had the most serious before the Games but as I get older I notice that my level is higher, that it is increasingly difficult for me to get into shape but when I catch it I walk more than a few years ago but also that there is a greater risk of injury. I train three sessions a day, one for each sport, plus gym, stretching… and when you realize it, the day is over. We are not machines, there are times when you need to disconnect, be with friends and not train so much. You have to give your head a break.

In Spain we are still immersed in Operation Galgo, you who compete internationally, do you think that Spanish depositors are looked at with a magnifying glass?
Yes and I know it from my own experience. I pass more drug tests in competition and surprise than the Germans or the English. We are always the same: people from Eastern Europe, South Americans and Spaniards. On the one hand, it seems sad to me that news like that of Operation Greyhound comes out, but on the other, I'm happy because there will be fewer cheaters. What I would like is that it be investigated until the end, that the appropriate measures be taken and that there are the penalties that must be there and that things do not remain in the air because that damages the image of all Spanish athletes. Those of us who are clean are also in question abroad because of this news that comes out. With doping there shouldn't be any kind of tolerance, I think the sanctions should be toughened. We hope that this time it reaches the end.

More than 1.700 triathletes in the Spanish SuperSprint Club Championships

How long does an inflatable paddle surf board last?

18 May 2022
Sponsored by
Search
Button back to top
Close
Close
This website uses its own cookies for its proper functioning. By clicking the Accept button, you agree to the use of these technologies and the processing of your data for these purposes. Configure and more information
Privacy policy