La Federation of Triatló of the Valencian Community takes stock of the 2020 season with a favorable result, despite the exceptional circumstances caused by the COVID-19 pandemic.

The Federation knew how to activate the work team to return to competition safely and responsiblye, fostering a COVID-19 Preventive Action Plan ( link) that was presented to clubs, organizers, technicians, officials and federated at the end of last May.

In this sense, he has led this round responsible for sport in general and triathlon in particular, with the holding 13 competitions, from July to November, and the culmination of the year 2020 in an unbeatable way.

The expected Triathlon World Cup, the first in the history of the city of Valencia, could finally be disputed and had the best international triathletes.

We became the Community with the most triathlon events held after the confinement of all of Spain.

Competitions held from July to November in the Valencian Community

Responsible and safe return of the triathlon

This is the Communiqué sent by the federation:

«The return of the triathlon competition in our Community could not have been possible without the preparation of the strict security and prevention protocol post COVID-19 that was developed, based on the indications of the WHO and the Spanish Triathlon Federation, by the Federació competitions team, led by José Luis Juan, Competitions Director.

The department worked on this Preventive Action Plan that was presented to clubs, organizers, technicians, officials and federated at the end of May.

From that moment, work was carried out on the basis of the document, making, as the months progressed, all the pertinent updates, as indicated by health authorities.

«In 2020 we have been forced to reinvent ourselves in the management of sports and competitive activity. We have had to lower the participation of sporting events to adjust to current health regulations by strictly applying the protocols of the Covid-19 preventive action plan to minimize the risk of contagion and make Triathlon a safe sporting activity.

As a Federation, our obligation is to promote sport in general and triathlon in particular, but guaranteeing the safety of our athletes and collaborators at all times.

This has meant that although some of the events scheduled for this year have had to be canceled, we have finally been able to finish the season by celebrating 13 sports events since the beginning of the pandemic, ending with a World Cup in Valencia, which is nothing. bad if we compare ourselves with other sports and other autonomous communities ”. José Luis Juan, Director of Competitions.

In this way we arrive at November 7, the culmination and closing date of the competition calendar, with the celebration of the València Triathlon World Cup.

The first in the history of the city, which represents a before and after in the triathlon competition calendar, not only at the local / national level but even more important at the international level.

Valencia has proven its worth as a triathlon city, thanks to its unbeatable environment with La Marina de València as a reference, its unique circuit and the support of key institutions of the city, such as the Valencia City Council, the Trinidad Alfonso Foundation, GVA and the Diputació de València. »

Next year's calendar foresees the celebration of 47 tests.

The triathlon of the Valencian Community presents an initial calendar with 47 competitions, of which 18 belong to the school triathlon.

2021 will start in January with the Ricardo Tormo de Cheste Circuit Duathlon, as has been customary in recent years.

From there, the tests will take place every month, keeping important regional competitions on the calendar such as the League of Caixa Popular Clubs, the regional Championships as well as the Provincial Circuits of Castellón, Valencia and Alicante.

The calendar is going to be expanded and the Valencian Community Triathlon Federation will reinforce not only the competition but also aspects of it that have already been presented at the end of 2020.

As now, the TRIVerd sustainability project: Fem Triatló Sostenible (see link), for the promotion of a responsible triathlon with the Planet. Or the technological transformation that the triathlon of the Valencian Community is undergoing with the use of material control applications and collection of numbers or the focus on the development of the single number.

“As a Federation we have worked to fulfill one of our priority objectives, the promotion of sport.

In this sense, we have been firm in our commitment to keep the competitions active, with all possible safety guarantees, to lead this responsible lap, and even by activating new programs such as Triverd, to promote sustainable triathlon, or technological transformation”, Vanessa Huesa, President of the Triatló Federation of the Valencian Community.

Approved the official headquarters of the Valencian Triathlon Federation 2022 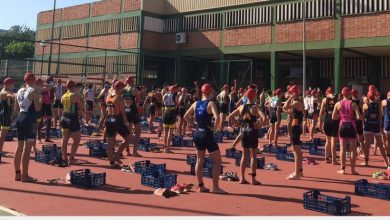 Published the 2021 triathlon calendar of the Valencian Community

13 December, 2020
Sponsored by
Partner
Button back to top
Close
Close
This website uses its own cookies for its proper functioning. By clicking the Accept button, you agree to the use of these technologies and the processing of your data for these purposes. Configure and more information
Privacy policy