The Galician Gustavo Rodriguez has shown once again that he is in a great state of form, and has crossed the finish line in the first place as he already did in Bilbao and Pamplona. He has imposed the Russian Stanislav Krylov and Victor del Corral in a close race. In females and going back many places, Gurutze Frades has been imposed on the Catalans Sara Loehr and Judith Corachan. The race on foot has been key once again. Peru Alfaro and the aforementioned Gurutze Frades are the new champions of Euskadi of medium distance.

The XXIX edition of the BH Zarauzko Triatloia It has once again been a triathlon party, demonstrating once again why every triathlete wants to run it. With hardly any waves and a good water temperature, the 675 participating triathletes have completed swimming without incident. Euskaldunes Peru Alfaro and Helene Alberdi were the first to travel the pits to start the bicycle segment.

The high tide, almost to the boardwalk, has penalized some favorites to whom the extra meters of swimming have been long. Victor del Corral, Gustavo Rodriguez or Gurutze Frades, main candidates, left with many lost minutes regarding the head.

The bike, very marked by the rain

The cycling segment has developed under a heavy downpour that has caused tense moments both participants and the public that crammed the ditches. Fortunately there has been no serious incident and the Red Cross of Zarauz has attended 6 people, without registering any transfer to the hospital.

The Russian based in France Stanislav Krylov has dominated the cycling sector while, from behind, Gustavo Rodríguez cut him off progressively marking the best time. In the fight to enter the podium Peru Alfaro maintained its position thanks to the advantage gained in swimming to Victor del Corral, who came very strong as he would later prove in the race on foot.

For the feminine side, Judith Corachan and Gurute Frades were the strongest, while Marina Damlaimcourt lost little by little prominence before the difficult conditions of the road falling to the 5º position. The vizcaína was the first to enter the pits followed by the Catalan trident formed by Judith Corachan, Dolça Ollé and Sara Loehr.

The public has not missed the race on foot

With a sign of professionals and popular triathletes so important could not miss the faithful public to the test.

While Gustavo Rodríguez went for the victory alone, Víctor del Corral, ambassador of INVERSE, showed why he holds the record for the sector in Zarautz and stalked the second place of Stanislav Krylov. What Victor did not count on was a combative Peru Alfaro that made things very difficult until the final meters. Behind these three the German Stefan Schmid, the Scottish Fraser Cartmell, the Portuguese Jose Estrangeiro, the Zarauztarra Jon Unanue, Diego Paredes and Marcel Zamora completed the renowned top 10.

In girls the fight between Gurutze and Sara has remained until the last round. The advantage of the representative of BH in goal has been of scarce 22 seconds on Sara Loehr that came from a fourth place last year. Judith Corachan closed the podium and managed her advantage with Marina Damlaimcourt who climbed a position beating Dolça Ollé, who accused her effort on a bicycle. Eva Ledesma, Anna Noguera, Ibone Sanchez, Ioana Osa and Arrate Mintegui tenth have closed the positions of honor. The end of the party will last until late hours with the traditional dinner of the triathlete, in which popular and professional will sit side by side with the more than 250 volunteers of the ZTri, true soul of the test 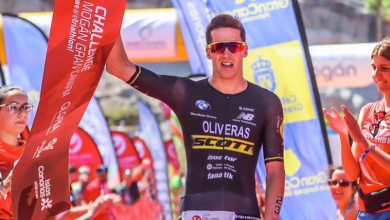 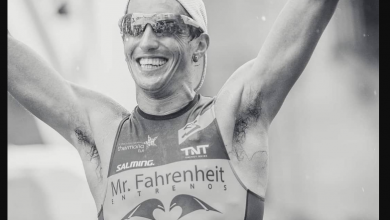 Gustavo Rodríguez goes down for the Zarautz Triathlon 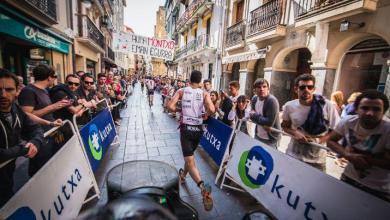 A great level in the start list of the Zarautz Triathlon