The triple IRONMAN world champion Jan Frodeno He has published a message on his social networks thanking all the followers for the suggestions they have offered him these days to find a new challenge.

A week ago, the German published a post on Instagram asking his followers for proposals to find a new challenge before Kona.

Among the many comments, some from professionals, highlighted the Lionel Sanders proposal to compete with him in the IRONMAN Coeur D'Alene .. «I pay you for the flight, hotel, car and meals if you come to compete with me "

Frodeno published on his networks that is already deciding what challenge to do and among them I highlight the de Lionel Sanders.

Do I accept Sanders's proposal or do I leave him hanging?

Well, today Frodeno has published a survey on Instagram to see what to do with Sanders' challenge

Do I accept Sanders's proposal or do I leave him hanging? has been the question ... 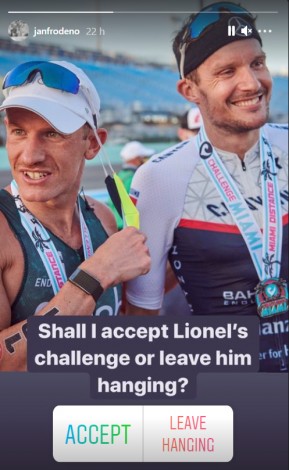 At the time of publication, the result is at 90% that if you accept it

We will be attentive to see what your final decision is, but a duel between these two greats could be one of the most exciting incentives for the world of triathlon, for the show offered by both triathletes.

Good news for Lionel Sanders, he will be a father

Jan Frodeno Out of Challenge Roth

26 June, 2022
Sponsored by
Partner
Button back to top
Close
Close
This website uses its own cookies for its proper functioning. By clicking the Accept button, you agree to the use of these technologies and the processing of your data for these purposes. Configure and more information
Privacy policy