Today has been held in the city of Berlin, his marathon where the winner, has been only 2 seconds to get the world record in the specialty.

In second place the Ethiopian also finished Birhanu Legese, with 2: 02: 48, which makes the race the third fastest marathon in the world. Third was Sisay Lemma, with 2: 03: 36.

As reported by VanguardBekele, who once again questions the Kenyan supremacy of recent years in Berlin, started off as a favorite and had the best mark in the distance of all those registered, with the 2: 03: 03, which he achieved in 2016 in the German capital, an appointment known for its speed.

In Ethiopia Ashete Bekere, with an 2 brand: 20: 14, followed by compatriot Mare Dibaba, with 2: 20: 22. The favorite, Kenyan Gladys Cherono, failed to achieve her fourth victory in the German capital. The Berlin Marathon has achieved a new record for registrants, with a total 46.983 participants.

The Kenyan Eliud Kipchoge, achieved the world record last year in the marathon of the German capital with a time of 2:01:39.

Confirmed the Kipchoge-Bekele duel in a London marathon without popular 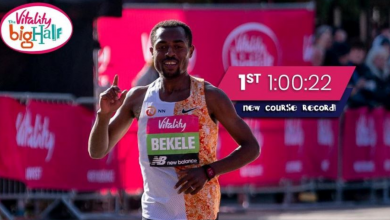 Kenenisa Bekele record in the London half marathon with 1:00:20

1 March, 2020
Sponsored by
Search
Button back to top
Close
Close
This website uses its own cookies for its proper functioning. By clicking the Accept button, you agree to the use of these technologies and the processing of your data for these purposes. Configure and more information
Privacy policy