In the month of September, on the 25th and 26th, the city of Valencia will celebrate its consecrated Valencia Triathlon, which in this edition will host the Triathlon European Championship, both in elite, paratriathlon and age groups. 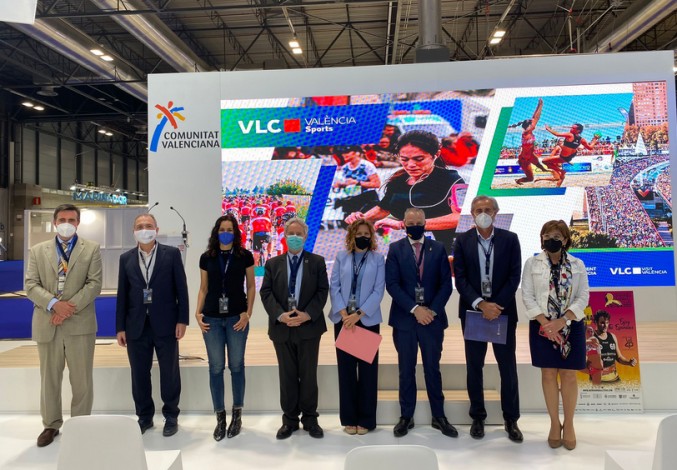 Federated athletes from all over the European continent, who are classified according to the criteria of their different national federations, may participate in it.

The competition will take place as usual in the surroundings of the Marina de València, with a swim in the dock of the port.

The cycling route will take place along two of the most important avenues on the city's seafront, Avenida del Puerto and Serrería. And again the foot race will go through the beautiful surroundings of the Marina, with the Veles e Vents building as a reference point.

The sporting event was presented yesterday in the Central Plaza of # FITURCV2021, in the presence of Pilar Barnabas, Councilor for Sports of the Valencia City Council, and representatives of different sports that make the city a nerve center for international sports, positioned as a safe sports destination.

The President of the Triatló Federation of the Valencian Community, vanessa huesa, made known the key characteristics of the event, and also recalled the organizational baggage that began in 2004 with the European Championship, a valid test for the Olympic Games. Athens 2004 in Elite category.

In recent seasons, the city has hosted the European Triathlon Cup in 2018, the European Under 23 and Paratriathlon Championships in 2019, and the last international test of 2020 with the World Cup held last November.

Vanessa Huesa thanked the Valencia City Council, the Trinidad Alfonso Foundation, the Generalitat Valenciana and the Valencia Provincial Council for their support of the Valencian Community triathlon.

"In this sense, from the FTCV and from the hand of the Spanish Triathlon Federation and the European Union Triathlon, we face again a great sporting challenge.

Surely the city, with its institutions, citizens and triathletes will once again demonstrate that it has the unique infrastructures and environment to hold a test of these characteristics".

José Hidalgo, President of the Spanish Triathlon Federation, regarding the choice of Valencia as the venue for a new international triathlon competition, stated that “the city in a very short time is becoming an iconic world triathlon city.

If last season València closed with a remarkable success in terms of organization, level and participation, and being able to organize the brightest event on the ITU calendar in 2020 in a very complicated year, in 2021 it will once again be a benchmark.

The city will mean the recovery of the great continental triathlon, hosting after two years the European Championship, the great reference for European triathletes, who in the end are the great dominators of world triathlon.

And we are not only talking about the elite, but also about the juniors or the age groups. Valencia will be the center of the European and world triathlon next September.

I would also like to emphasize that València is tremendously unique because it is capable of allowing public entities such as the Generalitat, the Valencia Provincial Council and the City Council to work in coordination with private referents such as the Trinidad Alfonso Foundation.

It is a pleasure to work in this way where we are all able to come together to be able to host the great competition that we all want in Valencia.

And I want to conclude by highlighting that the city is going to be much more than triathlon and sport of the highest European level, since it will also be sustainability, tourism linked to sport, economy ... and we are very happy because the València European Championship is going to mean also a project of reactivation of tourism and the economy and of strategic positioning with the sustainability of your city

Where to watch the Munich Triathlon European Championship live?

Augusts 11, 2022
Sponsored by
Partner
Button back to top
Close
Close
This website uses its own cookies for its proper functioning. By clicking the Accept button, you agree to the use of these technologies and the processing of your data for these purposes. Configure and more information
Privacy policy