This Sunday the last ITU test of the year in Spain, the European Middle Distance Championship in Ibiza with the presence of three Spanish triathletes

Little by little the triathlon season is coming to an end, and next Sunday will be the turn for the middle distance, competing for the last competition of the year in Spain, the European Championship from Ibiza MD Triathlon

The competition will start from the beach of Ses Figueretes in Ibiza, with one of the most spectacular swimming of the Spanish calendar, the triathletes will swim in a circuit of 1.900 m surrounding the Island of Ses Rates. Afterwards, the cycling sector takes place in the interior of the Island of Ibiza, where 2 will take turns on a hard circuit of 40km dotted with short and hard slopes. Finally, the foot race consists of 4 turns of 5km that run between the beach of Ses Figueretes, the center of Ibiza and the marina.

In the men's category there are 25 registered triathletes. The favorites are the Belgian Diego Van Looy, the Belarusian Aliaksandr Vasilevich, the Ukrainian Viktor Zyemtsev, the Russian Ivan Tutukin and the Slovenian Jarolav Kovacic. On the Spanish side Cristóbal Dios y Albert Moreno they will be the representatives.

In the female category 12 triathletes on the starting list, with the Danish Camilla Pedersen and the Belgian Alexandra Tondeur as great favorites. They also aspire to the podium Belarusian Hanna Maksimava and the British Alice Hector. Anna Noguera It will be the Spanish representative.

Finally, we must also mention the participation of two Spanish paratriathletes, Gaspar Vañó in PT5 and Dani Molina, who is unbeaten in ITU tests since May of 2017.

Ibiza will host the Multisport Triathlon World Championship in 2023 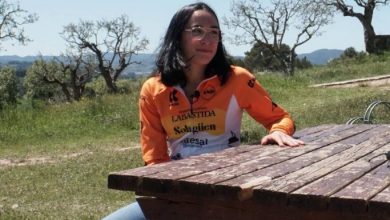 Anna Noguera asks for help with her hip surgery

November 30, 2019
Search
Sponsored by
partners
Button back to top
Close
Close
This website uses its own cookies for its proper functioning. By clicking the Accept button, you agree to the use of these technologies and the processing of your data for these purposes. Configure and more information
Privacy policy