The Madrid Casa de Campo has lived a historic afternoon with the celebration of the seventh edition of the Subaru Cross Triathlon, a test that has become one of the benchmarks in the capital and that, in 2019, has broken its record of registrations, with more than 1.000 participants, what makes it el cross triathlon with greater participation in Spain.

The victory for Chema Martínez

The athlete Chema Martínez and the cyclist Luis Pasamontes They have been responsible for inaugurating the new category of relay race. Martínez competed with his daughter Paula, in the water, and the popular humorist David Amor on the bicycle.

While Balaclava had the help of the enduro world champion in 125 cc, Mario Román, for the swimming stretch and Irene Santos in the foot race. Highlight the duel in the water between Paula, really competitive, and Mario, far from its natural environment on an off-road motorcycle. A great sports pulse that also encouraged the atmosphere of participants and public to be seen hand in hand competing against familiar faces of the sport.

In the new category by relay, each triathlete made a sector of the competition and the team's time was the sum of the times of the three participants, there being, in addition, a male option, another female and a final mixed. An initiative of the Subaru Triathlon Cross that has been a resounding success, with about 200 team participants among the thousand enrolled in the test.

José Almagro and Eva García the winners in the PRO category

Both the relay test and the Pro category featured a 700 distance of meters of swimming, 20 kilometers of mountain biking and a final segment of 4,2 kilometers of running, while the Open completed the same circuit, although with more distances Affordable for amateur participants.

One more year, the individual Pro category offered a show of the highest level, with the participation of some of the best triathletes on the national scene. The victories went to José Almagro y Eva García in male and female category, respectively. While in Open, the winners were Ivan Acute y Ester Morales.

The location offers an excellent location for cross triathlon practice

The Casa de Campo Park again offered a tour of fast mountain bike tracks and running on foot using the routes allowed and compatible with the general objectives of conservation of the great lung of Madrid.

In addition, after maintenance, the famous lake of the enclosure has offered some exceptional conditions to be able to do the swimming stretch. Some Perfect tours for the most popular triathletes and less experienced with MTB.

The location offers a excellent location for cross triathlon practice, in the heart of Madrid and well connected to both participants and the public, which has allowed the consolidation of the event as one of the best cross triathlon in Spain.

More information and classifications in http://www.subarutriatloncross.com/ 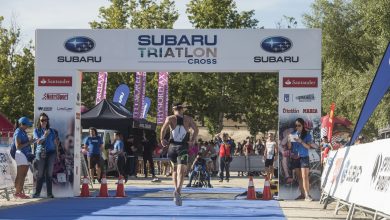 Subaru Triathlon Draw, we raffle a Pack of two registrations

Augusts 10, 2019
Sponsored by
Search
Button back to top
Close
Close
This website uses its own cookies for its proper functioning. By clicking the Accept button, you agree to the use of these technologies and the processing of your data for these purposes. Configure and more information
Privacy policy