The city of Madrid has hosted the second edition of the Challenge Madrid whereThe Belgian Timothy Van Houtem has reissued last year's victory y Pablo Dapena has achieved a spectacular second position, debuting in a full distance in a big way.

Challenge Madrid It started punctually at 7:45 with the men's elite start. The Riosequillo reservoir in Buitrago de Lozoya, was the place where the 3.800 m were swamped in an 1.900m circuit that the triathletes gave two laps.

Entry of Pablo Dapena in Meta

The Spanish team came out with four triatelles taking the top four positions in the T1. Carlos López Diaz was the first to get out of the water with a 46 time: 10, with Pablo It's pitiful stuck to it. To 5 'in third position arrived the T1 Ramon Ejeda, together with Albert Moreno y Morten Brammer. Meanwhile Timothy From Houtem 10 'was almost left with the head of the race in the first segment. Further back still other favorites like Carlos Aznar o Alejandro Santa Maria.

The fourth position was for Albert Moreno who at that time was next to the Belgian. It's pitiful y López they were still in the middle of the cycling segment, but with Houltem and closer. The Belgian was making the best partial bicyclist and only yielded 2 'at km 100. Behind Moreno it was fourth to 4 'of Houlten.

Around kilometer125 Van Houlten hunted It's pitiful y López, the three of them went through control point number three together. Moreno he was fourth more than 9 'of the leading trio, along with Morten Brammer.

In the final kilometers of cycling From Houtem He was going alone, breaking the race head and arriving at the T2 with a time of 6: 09: 23. His partial ciclsita was the best of all the participants, with 5: 10: 44. Pablo It's pitiful he was second in the T2 to 4 minutes and a half of the Belgian. Third was Carlos López who lost time in the last kilometers of cycling segment and reached more than 14 ' It's pitiful to the T2. Fourth was Brammer to 40 »of Carlos. Behind several trialtetas traced much of time lost in swimming and arrived in top10 position as Javier Garcia o Alexander Santa Maria.

A spectacular marathon with steps along the Calle Mayor, the Palacio Real, the Senate, the Plaza de España, the Templo de Debod or Paseo Pintor Rosales was to end this edition of the Challenge Madrid.

Timothy From Houtem He came out with strength to face the 42km of the race on foot with a good rhythm and he passed first in the first round, maintaining practically the same difference with It's pitiful, that was second. Behind if significant variations were taking place: Brammer was third, with 4 'of advantage over Carlos López, while the fifth place was for Carlos Aznar who had gone up five places and sixth was Santa Maria.

When passing through the second round, From Houtem will be even more leader with It's pitiful almost 10 '. Third, Danish was maintained Brammer y Carlos López it was still fourth, with only 2 'of advantage over Carlos Aznar that came flying. At the start of the third round, everything remained the same in the podium positions, but behind Aznar was placed fourth.

Finally, a convincing victory for Timothy From Houtem with a great partial cyclist and a solid race on foot, who was proclaimed European champion of Long Distance. Second in goal and silver medal was Pablo It's pitiful, the current LD world champion. The third to enter the finish line was Carlos Aznar , but as he was not part of the selection he did not go up to the podium. The fourth in goal and bronze medal was Morten Brammer followed by Alejandro Santamaría that entered in fifth final position finishing fourth in the Eruopa Championship.

As regards the female competition lto British Laura Siddall has won the second edition of the Challenge Madrid, followed by the Belgian Alexandra Tondeur and the American Lisa Roberts.

The Italian Margie Santimara was the first to cover the 3800m of swimming, with a great time of 53'39 », only surpassed by four men. Later, at almost 5 minutes of it, it was a quartet with the Austrian Eva Wutti, the British mary Norman, Laura Siddall and the Belgian Alexandra Tondeur

Pronto Wutti, Tondeur and Siddall They began to pedal hard, overtook the Italian and placed themselves in the lead, passing by the 50 km. In the second point of timing Laura Siddall I spent pulling the group with Tondeur y Wutti next to them. For its part Santimaria yielded more than 7 minutes. Fifth era Lisa Roberts, the winner of last year, who at this point left more than 12 minutes with the head of the race. In the second third of the cycling segment Laura Siddall broke the competition and left alone, arriving at the T2 with a time of 6: 46: 18. To 6 minutes of it she Eva Wutti together with Tondeur More back to almost 20 'was fourth Santimaria and a little later it arrived Roberts to the second transition.

After the first leg of the race on foot Laura Siddall I was still comfortable in the first position, managing the advantage. The Belgian Tondeur He was second but he could only cut a few seconds with the leader. Third era Eva Wutti to almost 7 minutes of Siddall. Meanwhile Lisa Roberts I was doing the best partial on foot and I was fourth at this point in the race, more than 13 'from the Austrian.

At the beginning of the second round, the two heads continued the same,  Siddal solid leader and Tondeur to 5 miutos. Behind Eva Wutti I suffered and I wasted time with Roberts who was already at 10 minutes from the podium. In the third round Tondeur had cut the lead to just over 4 minutes, but the leader Siddall I kept running very full. For its part Roberts was just 5 'on the podium, cutting a lot of time Wutti On the way through the fourth round Roberts He was already third, taking time to Wutti who was not able to run well in the marathon.

Finally victory has been for Laura Siddall who was proclaimed Champion of Europe, second was the Belgian Alexandra Tondeur who achieved the silver medal. The third place in the Challenge Madrid corresponded to the winner of last year, the United States Lisa Roberts. Fourth in goal and bronze medal a great Eva Wutti that despite suffering a lot on foot managed to climb to the podium. The fifth position has been for the Italian Santimaria.ç

List of Spanish summoned for the LD 2021 Triathlon World Championship Pablo Dapena will seek victory in the Challenge Gdansk 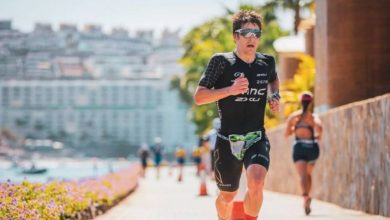 Pablo Dapena "It always annoys you to finish second"