This year the Vuelta a España was going to start in Holland with a special stage in the city of Breda.

Ultimately it won't be like this due to the current situation, but Bkool it will allow you to visit it from home

From Monday August 10 to Sunday 16, the Bkoo virtual cycling appHe offers the possibility of competing on the real route of what was to be the first stage of La Vuelta a España 2020.

Thanks to Bkool technology, any cyclist in the world will be able to test the route in video or compete with other riders in 3D without leaving home with ¡Vamos Brabant! by Bkool.

The same route as the professionals

The route that was to serve as the starting signal for La Vuelta 2020 will transport you to the lDutch town of Breda, with several sections in its surroundings where it is possible to enjoy some of the most characteristic landscapes of the Netherlands.

The immersive feeling it provides video view will make you feel like you are there, ccompeting like a professional cyclist with rivals from a lot of different countries.

You can try it for free

You can try the stage for free thanks to the 30-day free trial available at bkool.com

You already know what it is like to conquer glory in stages of La Vuelta or the Tour de France.

Next Sunday, August 16 at 14:XNUMX p.m. (CEST), the Dutch ex-cyclist Lars Boom will accompany Bkool users in a unique Group Ride, in which they will have the opportunity to complete the stage at their wheel. Will they be able to keep up with him?

A commitment to original and different sport

The Breda City Council is especially excited about the competition, which is a new opportunity to show the world the country's cycling tradition, in addition to its beautiful landscapes.

For the special race on Sunday with Lars Boom, they have organized an event at the Bredase Koepel, one of the most emblematic buildings in the town.

As it could not be otherwise, the competition will have all the relevant distancing and safety measures.

In the words of Daan Quars, Breda Councilor for Sports: »Unfortunately we will not have La Vuelta this year, but that will not prevent us from continuing to enjoy cycling.

It's great that so many people want to participate and experience the same sensations that professional cyclists would have racing in and around Breda.

They can do it at the Bredase Koepel in complete safety or if they prefer, from their own home. The important thing is that the excitement and fun continue to live. "

BrabantSport, one of the official sponsors of the event, is also particularly satisfied.

According to its director, Michael Reinders, it is a great alternative after the forced suspension of the stage. “In this way we ensure that people can experience first-hand all the magic of the route.

It's a shame that La Vuelta can't finally start from here, but thanks to Bkool the stage will be able to take place virtually. 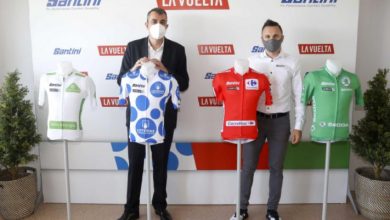 These are the Santini Tour of Spain jersey

6 May 2021
Search
Sponsored by
partners
Button back to top
Close
Close
This website uses its own cookies for its proper functioning. By clicking the Accept button, you agree to the use of these technologies and the processing of your data for these purposes. Configure and more information
Privacy policy