In female elite category, Camilla Pedersen achieved the victory after staging a magnificent competition. In this way, the Danish woman obtained the title of European Champion of MD and at the same time, revalidated the triumph obtained in the last edition of the Half Challenge Barcelona.

At the exit of the water, Maria Czesnik and Ricarda Lisk led the test, along with Holly Lawrence and Camilla Pedersen. While Eva Ledesma was the first Spanish to complete the 1.9 km of the sector, in an outstanding eighth place.

At the start of the 90 km cyclists, the British Holly Lawrence was in the lead, followed by Pedersen and Lisk. The Danish would impose a strong rhythm and achieved the best partial of the sector. Pedersen managed to leave behind his rivals in a splendid cycling segment.

Pedersen would maintain his advantage over the course of the 21 km of running on foot to reach the finish line with a wide margin over his rivals. Next, the Irish Eimear Mullan was awarded the silver medal entering five minutes and 37 seconds of the Danish. Mullan held a very regular competition throughout the three segments. While the Polish Maria Czesnik arrived at 7 minutes from Pedersen and hung the bronze medal.

For its part, Anna Rovira achieved the 14ª plaza; while the other Spanish participant, Eva Ledesma was disqualified after not stopping in the penalty box during the course of the race on foot.

Upon his arrival at the finish, Pedersen declared that "it was incredible ... a challenge with this new cycling segment. I had problems with the bike chain a couple of times, even so everything went well and I knew how to enjoy the circuit as much as possible, in which I felt really comfortable. I love the circuit, it's fun and a real challenge. Before starting a race I never expect any concrete result, I go out to give my best, and achieving victory makes me feel really happy. "

One more year, Calella has once again hosted an unforgettable event, bringing together more than 2000 triathletes from all categories. Among them it is worth mentioning the paratriathletes, who have once again demonstrated all their honor. Likewise, the competition has had the support of the public and the collaboration of the volunteers; all this together with the great organization of the event. 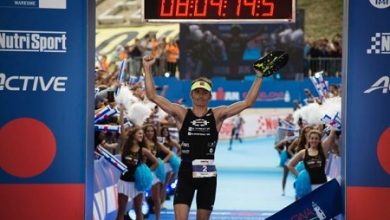 Camilla Pedersen and Sylvain Sudrie win in the first edition of the Ironman 70.3 Barcelona

Promotion HALF CHALLENGE BARCELONA, 10 dorsal to 150 €

17 March, 2014
Search
Sponsored by
Partner
Button back to top
Close
Close
This website uses its own cookies for its proper functioning. By clicking the Accept button, you agree to the use of these technologies and the processing of your data for these purposes. Configure and more information
Privacy policy