Indurain today became the First Coronavirus cycling tour with the support of Banco Santander in its firm commitment to the comeback of popular sport.

The Indurain limited to a thousand participants and fulfilled the most strict sanitary security measures established by the Health Institutions, the World Health Organization and the Royal Spanish Cycling Federation.

The start of the test was established between eight and nine in the morning to allow a greater distance between the participants and the start was made in runs of 100 cyclists every ten minutes.

It was necessary always keep the distance of 10 meters from behind and forced himself to overtake looking for the maximum distance.

The use of the mask was mandatory upon departure and arrival, being able to get only 200 meters from both, and also at the aid stations.

Miguel Indurain, Banco Santander ambassador, went out to roll for another year with his countrymen and cycling fans in the test that bears his name, with departure and arrival in his hometown of Villava, along with his partner in the 123rd team. Santander Bank, Martin Fiz.

The Indurain commemorated the triumphs of Miguel Indurain in the Tour de France, Giro d'Italia, the World Cup and the Olympic Games, and especially the 25 years since his last victory in the French event.

Miguel participated in the 180 kilometer long march, together with his wife Marisa who opted for the short distance of 100 km. "We know that this year's was not the best of the scenarios, but it had to start," Miguel Indurain congratulated himself.

Martín Fiz, A lover of challenges, this time he changed the shoes for the bicycle and debuted in this cycling tour and joined Miguel Indurain at the start.

The Banco Santander ambassador also participated in his case over a distance of 100 kilometers. «I have met my expectations. I started the march as a 'globero' but in the end I came up.

My challenge was to have a good time and not fall, so I have embroidered it. I have been strong and now in the Barcelona triathlon I am going to go for Miguel », he joked. The former cyclists Perico Delgado, Joseba Beloki, Melcion Mauri and Roberto Laiseka, also participated together with Miguel Indurain.

Banco Santander and its commitment to the comeback

Indurain 2020 became a new sporting challenge at the hands of Banco Santander, being the third great challenge led by Banco Santander at the beginning of the new normality due to Covid-19, after the celebration of the Reset Santander de Valdemorillo (Madrid ) and # 123aRemontar Barcelona with the participation of Miguel Indurain in both races.

The sponsorship of Banco Santander wants to encourage and inspire the comeback from all over the country for the well-being of companies and families.

Banco Santander has not ceased to promote the practice of sport during confinement with multiple online actions and in the return to normality, it continues to lead and promote healthy lifestyles to continue helping people in their day to day. His mission continues to be helping people and businesses prosper. 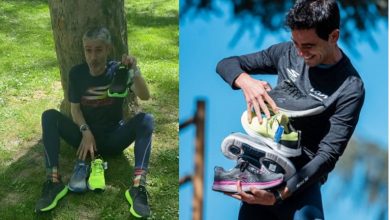 27 February, 2021
Sponsored by
Partner
Button back to top
Close
Close
This website uses its own cookies for its proper functioning. By clicking the Accept button, you agree to the use of these technologies and the processing of your data for these purposes. Configure and more information
Privacy policy