This simple and popular exercise has its origin in the United States Army, initially used to harass the military, it was later established as essential in physical conditioning and later became popular among physical education teachers and coaches.

Keep reading if you want to know everything that this simple exercise can bring you.

What is a Jumping Jack?

The exercise Jumping Jack consists of performing repeated standing jumps, in an upright position, with an initial position of feet together and arms close to the body and reaching up to join hands above the head and keep your legs apart.

That is, legs and arms open and close simultaneously and in a coordinated way.

Where are you from?

There are several theories where its name comes from, the first is that it is attributed to a United States general from the 1st World War called John J. 'Black Jack'.

This was a puppet that, if pulled by the strings, raised its arms and legs as is done in jumping.

How to do it correctly?

To execute it correctly we advise you to warm up beforehand, due to its intensity, and during its execution, keep the abdomen activated.

Likewise, it is advisable that perform the reception of the jumps with the metatarsal area and slight knee flexion, so that you cushion the impact.

Things to keep in mind

For example, It is not a recommended exercise for people who are overweight or obesity or injuries to some of the joints involved in movement, mainly due to impact.

At first glance, Jumping Jacks are a simple exercise, but it can be a challenge if you consider different levels of demand. 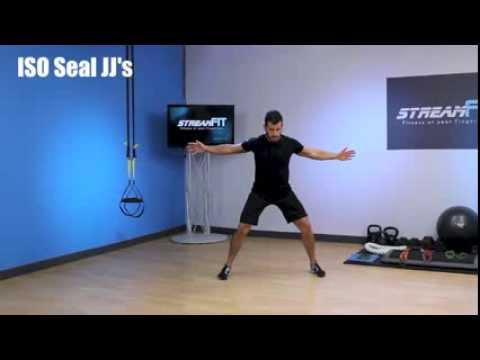 How to adjust the reach on the levers of a bicycle?

2 easy workouts to include COMPEX in your workouts